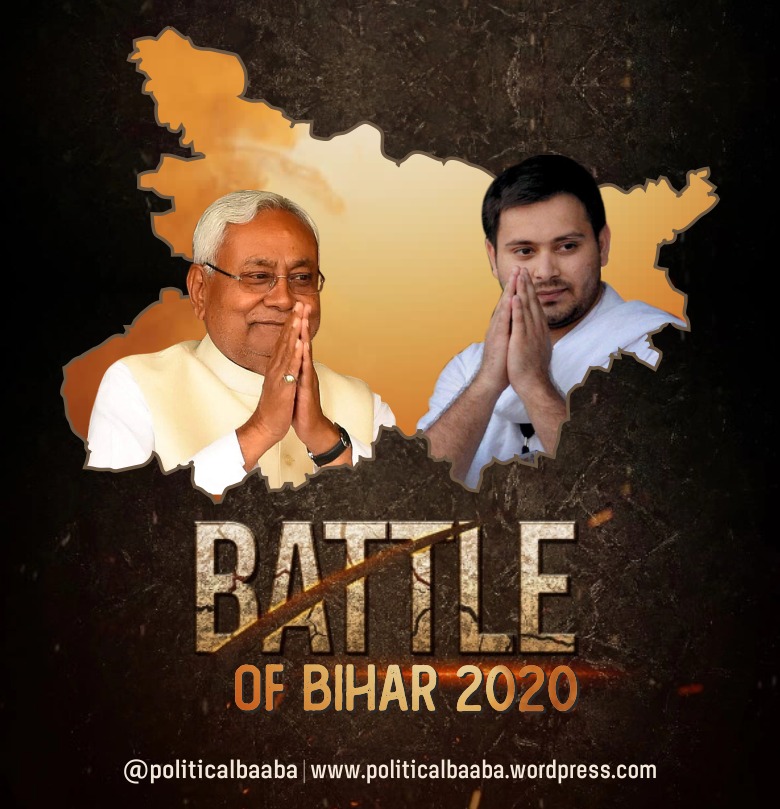 In perhaps his last elections, Nitish is facing his toughest battle in Bihar. Sushashan Babu’s party Janata Dal (United) has launched the campaign ‘Nitish sabke hain’ at a time when its alliance partner Chirag Paswan’s Lok Janshakti Party (LJP) is putting up candidates against his party, ostensibly with the backing of the BJP.

Nitish has emerged as the undisputed leader of the alliance credited with taking Bihar to the path of development after jungle raj of Lalu Yadav. He is a perfect example of personification in Indian politics, Nitish is JD(U) and JDU is Nitish, much like Modi.

Over the years, he has crushed all competition within the party. He propped Sharad Yadav against George Fernandes and then dumped Sharad when he tried to emerge as a parallel power centre. Rashtriya Lok Samata Party’s Upendra Kushwaha left JD(U) in 2012 due to the dictatorial attitude of Nitish.

He appointed poll strategist Prashant Kishor as party’s Vice President after he crafted a strategy to defeat Modi. Prashant was touted as Kumar’s successor but the two fell out due to differences on CAA and other matters.

While Nitish is seeking a fourth term, question marks remain over the future of JD(U). Who after Nitish? The party is primarily built up of members of erstwhile Janata Dal in Bihar. With the weakening of the Rashtriya Janata Dal (RJD) many of its leaders have joined the JD(U). In fact its joked in the state that the membership of both parties is complementary.

There is no leader who commands similar clout as Nitish in JD(U). His close confidante RCP Singh, Lallan Singh and Basistha Narayan Singh lack charisma and state wide appeal.

The party faces the risk of disintegration post retirement of Nitish, many could go back to RJD or join BJP. Unless he appoints somebody as 2nd in command and oversees a transition in this tenure, assuming NDA wins. Kumar’s son Nishant has shown disinclination towards politics.

Over the past few elections the JD(U) has held hands with both sides, NDA as well as the MGB, this flip flop has branded Nitish as opportunist.

Nitish by caste is a Kurmi. He has built a dedicated vote base of most backward castes and mahadalits, kurmis, koeris and a section of minorities. His standalone vote share is 16%. He has exhibited the ability to transfer this vote seamlessly without much leakage to its alliance partners BJP and RJD.

This strategy has provided him the flexibility to align with whoever he wishes to remain in chair. His core base has remained intact as he has devised specific schemes for mahadalits and MBCs. Kumar’s earlier posturing of keeping a distance from Modi also helped him to win some minority support.

JD(U) gets a leg up whenever it ties up with BJP, from upper caste and OBCs. It loses this vote while contesting alone. When contesting with RJD, while it maintains its vote share, the composition of its support changes, it gets more Muslim and Yadav votes.

The above table shows that BJP is its natural ally, it is able to expand its reach while partnering with it. With RJD, the impact is neutral as he loses some OBC and SC support while gaining MY support. However, he has not been able to hold on to these vote blocks once JD(U) severs ties with these parties.

Despite his good work in the first two terms, Nitish hasn’t been able to expand his anchor voting segments. It is this fact which makes him dependent upon allies either BJP or RJD to remain in power.

However, this helps him to keep in check its overzealous ally BJP. If it arm twists Nitish too much, he can jump the ship.

This Article has been originally published here