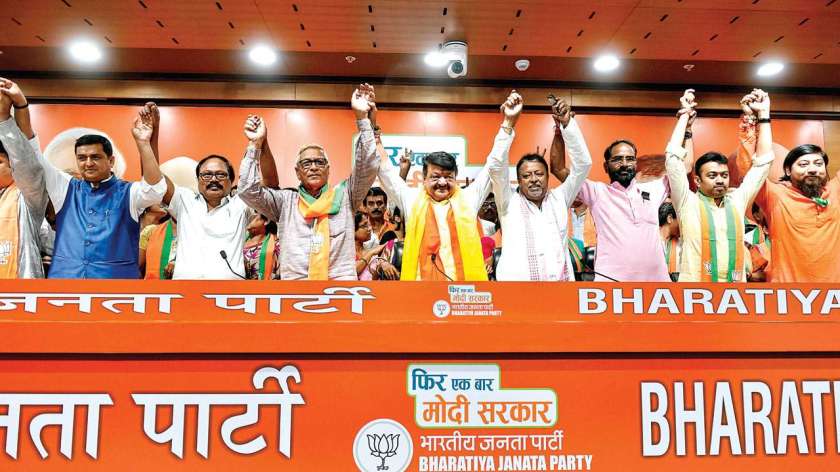 Critics who were giving BJP not more than 8-10 seats in Lok Sabha were shocked at its tally of 18 seats (+16 vs 2014). It recorded a vote share jump of 23% clearly emerging as the main opposition to Mamata overtaking the Left and benefitting from its collapse. Even if TMC and Congress would have contested together BJP would have still won 12 seats. TMC was leading in 161 Assembly seats, 16 more than majority and BJP in 123 as per trends.

The BJP checkmated Mamata in her own brand of politics. Bengal has been a hotbed of class politics with not much role in caste politics. Left positioned itself as the champion of poor, downtrodden and minorities, though it was Bhadralok which held majority cabinet positions and power.

In 2009, for the first time, Mamata flirted with caste politics. A strategy was put in place by Mukul Roy (now in BJP) to divide the SC vote (19% of the population) by wooing the influential Matua community. 55-60% of the SC population used to vote for Left Front. Mamata became a lifetime member of Matua Mahasangha in December 2009.

The TMC received 48% of Matua and 46% of other SC votes in 2011 state elections in which Mamata displaced the 34-year rule of Left. Modi-Shah duo also set their eyes on this vote bank. The community’s spiritual family split into two groups, one backing the BJP and other the TMC after the death of its leader. BJP received strong support from SC voters in Lok Sabha.

Ten years is a good enough time to develop anti-incumbency against any government. Mamata’s constant conflicts with the central government are also impacting state government’s performance. Many voters could be swayed, thinking that same government in the Centre and the state is good for development. Mamata is seen as doing minority appeasement. This has upset even the educated Hindus who do not believe in caste/religion politics.

She has lost her cool on many occasions and pressure is clearly visible on her face. The BJP is enjoying all this tamasha. Recently, a video of Mamata was doing the rounds wherein she stopped her vehicle after hearing ‘Jai Shree Ram’ chants and was seen asking officials to take action.

Her handling of the doctors’ strike which has paralyzed the health facilities in the state, with 700 doctors resigning at last count, has evoked nation-wide rage among the medical fraternity. Mamata’s statement that ‘outsiders’ had entered medical colleges to create disturbances and the agitation was a conspiracy by the CPM and the BJP has added fuel to the fire. Mamata has accepted all demands of the doctors requesting them to return to the office which they have rejected.

Her statement that if you are in Bengal you have to speak Bangla is an attempt to create a wedge between locals (Bengalis) and outsiders (non-Bengalis) and brand BJP as a party of Hindi speaking North Indians. She is trying to invoke the Bengali pride. As per estimates, 15% of the population of Bengal consists of non-Bengalis which are likely to further consolidate behind the BJP.

The BJP enjoys the support of half of the Hindu population which translates into 35% vote share, its core vote now. Many cadres of Left have switched over to BJP, demoralized by their existential crisis, and have given the much-needed last mile connectivity which it was missing earlier. The deaths of workers (which are highly condemnable) after elections shows that damage has been inflicted on both sides and BJP workers are not taking it lying down like earlier. The organizational structure has been emboldened.

However, challenges remain. PM Modi factor played a big role in the BJP’s performance in Lok Sabha. About one-third of the votes received by BJP were due to PM Modi. In state elections, this factor may not hold to be that strong like it was seen in Delhi and Bihar state elections in 2015. PM Modi held 17 rallies and road-shows in Bengal. He may not be able to campaign with same vigour in state elections due to Prime Ministerial duties.

The elections are increasingly becoming personality oriented and BJP lacks a state level leader who can match Mamata. It needs to project a CM face soon and develop it over the next two years. Voters are also increasingly differentiating between state and national elections as witnessed in Rajasthan, Odisha, MP and Chhattisgarh.

In Lok Sabha, people voted to elect a PM, which gave BJP a boost. In Vidhan Sabha people will be voting to elect a CM, thus negating this boost factor. In 2016 state polls, BJP’s vote share declined by 7% in absolute terms and 40% in relative terms which it has to be wary of.

An alliance between Left and Congress could be potentially damaging as this combine could appeal to a section of voters. Mamata has appointed political strategist Prashant Kishore as her campaign manager exhibiting her first sign of weakness. The BJP has to refrain from pressures to invoke President’s Rule in the state which will act as a sympathy factor for Mamata. It needs to keep up the ante, manage defections and wait for Mamata to commit errors under pressure.

This article has been first published in DNA news.