The bua and bhatija jodi of Mayawati and Akhilesh have sealed an alliance for Uttar Pradesh. The duo kept Congress out from the scheme of things citing that the party does not have the ability to reciprocate vote transfer. The media is abuzz with debates about who will the Congress damage more, the mahagathbandhan or th Bharatiya Janata Party (BJP), in this triangular contest. The opinion is divided. In this post the writer will analyse who will benefit from Congress contesting independently. But first let’s take a look at the performance of the Congress party in Uttar Pradesh.

Since the advent of the coalition era in 1989, and the Mandal and Kamandal issue, which has a lasting impact on state politics, the Congress party’s graph has been witnessing a downward spiral in Uttar Pradesh.

From 31.8 per cent in 1989, its vote share declined to 6 per cent in 1998 when it even failed to open its account. From 1998 to 2014, its vote share has witnessed cyclical pattern. Its best performance in the last three decades was in 2009 when it surprised everybody by bagging 21 seats. In 2014, in Modi wave that gripped the state, it could retain just the family strongholds of Rae Bareli and Amethi.The party got 60.6 lakh votes in Uttar Pradesh in the 2014 Lok Sabha elections. It received 9.35 lakh votes in Amethi and Rae Bareli where it won.

On the remaining 65 seats it received on an average 79,000 votes per seat. It finished runner up in six seats, Bara Banki, Ghaziabad, Kanpur, Kushi Nagar, Lucknow and Saharanpur where its candidates received more votes than Samajwadi Party (SP)/Bahujan Samaj Party (BSP) candidates. It finished third in five seats where it received more votes than one of the mahagathbandhanpartners; Kheri (>SP), Mirzapur (>SP), Pratapgarh (>SP), Rampur (>BSP) and Varanasi (both >SP and >BSP).

A break-up of the Congress vote share in UP in 2014 shows that the biggest chunk of the party’s vote came from minorities (23 per cent) followed by the upper caste (21 per cent) and OBCs (20 per cent). While minorities have traditionally voted for a party which is in a position to defeat the BJP, the upper caste communities are vocal supporters of the BJP.

1. Congress will split the anti-BJP vote

Even after a scathing attack by Mayawati on Congress which, by the way, was no less than her attack on the BJP, Congress sympathisers feel the party will go for a tacit understanding with the mahagathbandhan. My political understanding is that Congress will fight spiritedly and try to prove a point that it can win without SP-BSP support, especially, after the victories in the three Hindi heartland states. While in Uttar Pradesh it cannot win more seats than mahagathbandhan, it can play a key role in 10-15 seats.

2. Congress will get a section of Dalit-Muslim-Yadav votes which would have otherwise gone to the mahagathbandhan

Some analysts are saying that the Congress will damage the BJP by garnering the Brahmin/upper caste votes of the BJP. The upper caste vote is only 21 per cent of total votes of Congress, going by the 2014 data. Muslims, Yadavs and Dalits which form the core vote bank of mahagathbandhan account for 39 per cent of Congress votes. This is almost double its upper caste support. The mahagathbandhan cannot defeat the BJP without the support of non-Yadav OBCs. Here as well Congress scores well with 35 per cent of its total support. 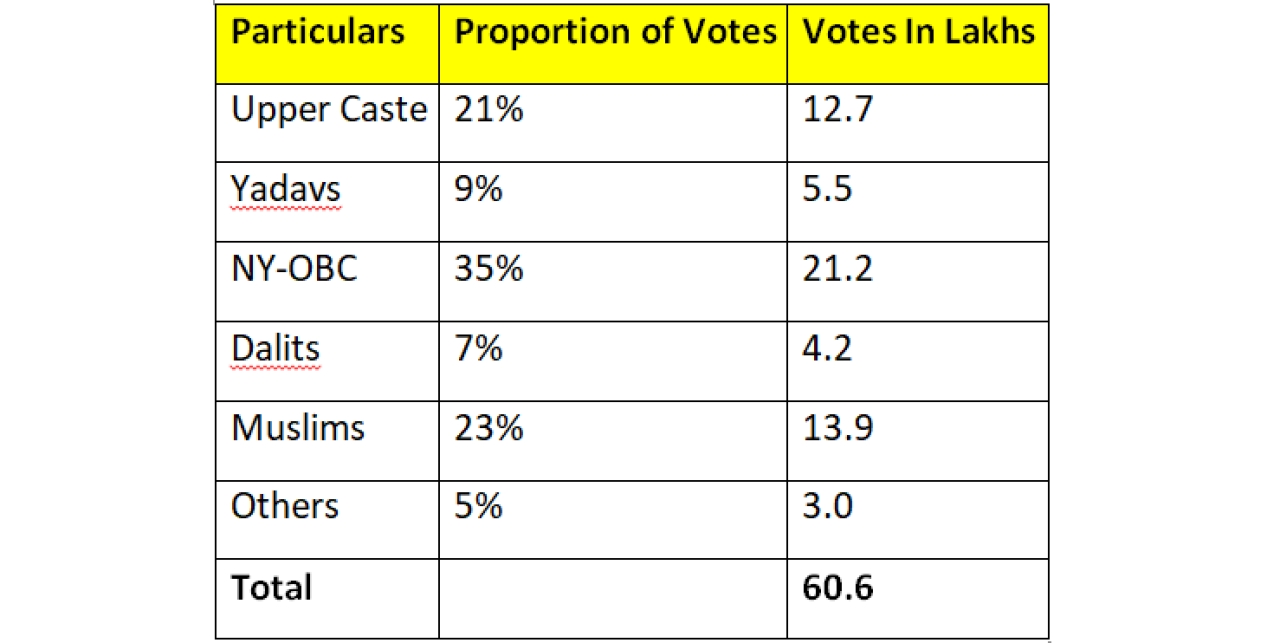 One could argue why Muslims would vote for Congress when they know the mahagathbandhan is in better position to defeat the BJP. This is because:

3. Congress could have compensated for leakages if it was part of the alliance

No community votes 100 per cent for any party in any elections and at best one could get is 70 per cent-75 per cent of one group’s vote, hence Congress could retain its Dalit, Muslim, Yadav (DMY) votes, which could hurt the mahagathbandhan in a tight contest. It is incorrect to assume that the Dalit, Muslim, Yadav voters of the Congress would not have voted for SP-BSP candidates in a larger alliance which included Congress as well.

4. Congress is strong in Urban pockets and Awadh region

UP has sent the maximum prime ministers to Parliament. In 1989, people voted for V P Singh and during 1996, 1998 and 1999 for Atal Bihari Vajpayee. In 2004, there was no PM candidate of the Congress and people were not gung-ho about Vajpayee’s return. In 2009, L K Advani (PM candidate of the BJP) contested from Gujarat while Rahul Gandhi who was conjectured to take over from Manmohan Singh in UPA 2 contesting from UP.

This is why the Congress surprised all with 21 seats. In 2014, Modi the PM candidate of BJP, contested from Varanasi and people voted for BJP in large numbers. This time it’s clear that the PM candidate of Congress is Rahul Gandhi. With both PM candidates of BJP and Congress contesting from UP, this could make the elections national rather than regional helping Congress like it did in 2009.

To sum up, the Congress contesting alone will damage the prospects of the mahagathbandhan in UP. The main issue why it was not included in the mahagathbandhan is that being a national party it would not have settled for anything less than 12-15 seats. That would have reduced the number of seats of SP-BSP and their ability to bargain in a hung Parliament situation. An interesting contest is on the cards.