If there’s one state that has truly surprised pollsters, it is Chhattisgarh. The Congress has swept the state, leading in 67 seats, at the time of authoring the piece.

The exit polls were in fact, divided on Chhattisgarh. Three different opinion polls showed a BJP victory, a Congress victory, as well as a tight contest. Chhattisgarh has witnessed bi-polar contests since its inception.

But it is for the first time in its history that Chhattisgarh has witnessed a three-cornered fight, with Ajit Jogi’s Janata Chhattisgarh Congress and the Mayawati-alliance showing their might to both national parties. Jogi contested on 55 and Mayawati on 35 seats.

Jogi’s Inroads Into BJP and Congress

The Jogi element made the contest interesting, after all he is the tallest tribal leader of the Congress, and the first and only CM from Congress in the state. He left the Congress in June 2016 and formed the Janata Congress Chhattisgarh.

Since Jogi had been with the party for many years, many felt that he would damage the Congress and it would be a cakewalk for the BJP this time. However, it was a very simplistic assumption to have made.

Jogi and Mayawati enjoy the support of much of the SC/ST community which account for 44 percent of the population. Jogi also enjoyed good support among the Satnami community in the state. While BJP had won 9 of the 10 SC seats in 2013, INC had won 18 out of 29 ST seats in 2013. So, from the start it was clear that he would damage both.

In an interview to Bloomberg Quint, Jogi claimed he’s making inroads into both BJP and Congress vote banks. When Jogi formed his own party, Congress alleged that he was the B-team of BJP.

Jogi Hands a Shocker to BJP

At the time of publishing, the tally was: Congress: 67, BJP 17, Jogi-Mayawati alliance 7 seats. The BJP tally is down by two-thirds. A massive blow. Leads for 5 seats are not available. With this, the Congress has taken a significant lead in Chhattisgarh. A lead so comfortable that it seems almost certain that they will form the next government in the state.

The vote shares of parties explain the severe blow which Jogi has dealt to BJP, the opposite of what was expected. BJP’s vote share has declined by 9 percent. At the same time, Jogi’s party (which was not in the fray the last time) along with Mayawati, has gained a 6 percent vote share, mostly at the expense of the BJP. On the other hand, the Congress has gained 1.4 percent vote share. Jogi’s dream of playing the kingmaker has been shattered. 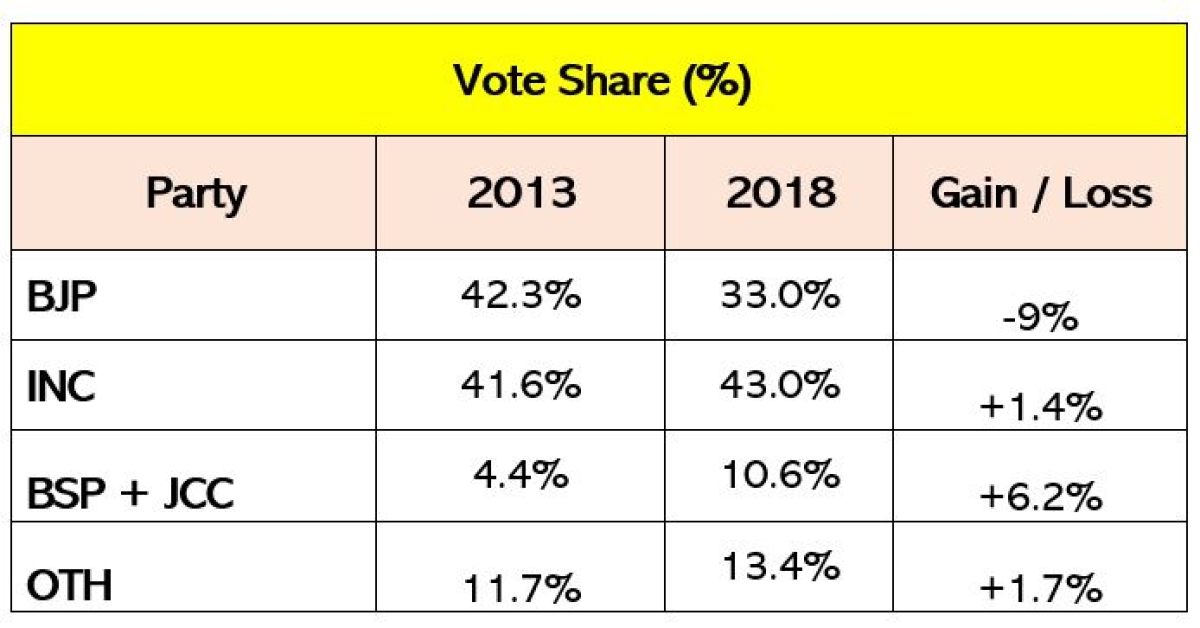 A look at the SC-ST reserved seats, 39 in total, also makes the picture clearer. While the SC seats have remained with the BJP over the years, ST seats have changed hands many times.

What Didn’t Work for Jogi?

Jogi’s party failed to make its symbol reach every village and taluka of the state. Due to Jogi’s association with the Congress over many years, much of the rural populace still felt he was with the Congress. So, while they wanted to vote for Jogi-Congress, they ended up voting for the Congress’s ‘hand’ symbol. Also, the fact that the Congress managed to create a perception of him being hand-in-glove with the BJP, helped the Congress.

To sum up, Ajit Jogi did play the role of a game-changer, but helped his parent party in turn, albeit inadvertently. He seems to have dented BJP and helped Congress win. Congress is all smiles, while Jogi must be ruing his decision. Jogi is like a Diwali rocket; nobody knows where it will go and whom it will hit.