Regional parties have played a key role in government formation at the Centre since the advent of the coalition era in 1989. BJP’s loss in three Hindi heartland states have given them hope of a hung Parliament in 2019 where they could again play the role of a kingmaker. Many such parties are discussing with Congress to form the mahagathbandhan (MGB) to take on the BJP. Alliances in key states of UP, Bihar, Maharashtra and Tamil Nadu, which account for 207 seats, out of which NDA won 150 in 2014, will decide the course of 2019.

Uttar Pradesh: The entire premise that BJP will have a tough time in 2019 is built on the alliance between Samajwadi Party (SP) and Bahujan Samaj Party (BSP) in UP. It was tested in bypolls to three seats earlier this year where BJP recorded big losses. BSP and SP have a solid vote base of Dalits, Muslims and Yadavs accounting for 44 per cent of the population. The alliance has proved it can seamlessly transfer votes in bypolls. Both parties are known for their anti-BJP stance. They are toying with the idea of joining MGB. Though, Congress is well past its prime in the Hindi heartland and is confined to two family-stronghold seats, it can be a game-changer in 13 seats.

Strategists in both parties feel while they will be able to transfer votes to Congress, the reciprocity is unlikely to happen like in 1996 (BSP-INC alliance) and 2017 (SP-INC alliance). There’s not much value which Congress brings to the table in UP. Both these parties may not want to tie their fate to MGB, and  instead join the Third Front and wait for results.

Bihar: The fight is veering towards a bipolar contest in Bihar. BJP-led NDA consisting of JDU and LJP vs RJD-led UPA consisting of Congress, Jitan Ram Manjhi, Upendra Kushwaha and Sharad Yadav. BJP inducted Kushwaha before 2014, to make a dent in Nitish Kumar’s Kurmi/Koeri vote bank which accounts for 12 per cent of population. After JDU’s ghar wapsi, BJP faced the problem of plenty. It eased out Kushwaha and retained Paswan who has considerable clout among Dalits (6 per cent of population). He will also act as NDA’s counter to Manjhi who is a leader of Mahadalits (10 per cent of population). Both alliances have almost equal support, NDA of upper caste, Kurmi / Koeri and Dalits while UPA of Muslims and Yadavs. Mahadalits and Most Backward Classes (24 per cent) hold the keys to success in Bihar. RJD hopes to encash on the double   anti-incumbency, against Modi’s 5-year and Nitish’s 13-year rule. Paswan who is a political bellwether has decided to stay with NDA. The problem of plenty has now shifted to UPA, so one can expect a big tussle on ticket distribution there.

Maharashtra: BJP almost won the state elections contesting independently held six months after Lok Sabha polls. It did partner with Shiv Sena to form the government, but their relationship strained forever. Shiv Sena which was the bigger brother in the state found itself to be the junior partner. It is playing the role of opposition within the NDA, sharply critical of Modi and has announced plans to contest 2019 elections alone. On the other hand, NCP and Congress have sealed a 24-24 formula for elections. Congress has adopted an accommodative approach for bigger goal of defeating BJP. Shiv Sena is adopting ‘hum to doobenge sanamtumko bhi le doobenge’ strategy.

As per my analysis, Shiv Sena could be routed and get 2-3 seats (current 18) while BJP may not suffer much with loss of 4-5 seats (current 23), based on 2014 numbers. UPA could gain 20-odd seats. Uddhav is making noise to extract his pound of flesh from BJP. Both parties need each other and will come to the table soon.

Tamil Nadu: All allies of BJP in state (PMK, DMDK, MDMK, PT) have left NDA. The political landscape has changed with Jaya’s death, split in AIADMK and entry of superstars Rajinikanth, Kamal Haasan in politics. DMK stays with UPA and could play a crucial role in 2019 as state exhibits a strong trend of AIADMK and DMK alternately sweeping the state in central elections. BJP initially hoped to ally with AIADMK however, split of TTK, has forced a rethink. It needs to bag few seats here to negate losses in North and West where it has maxed out. It has also sent feelers to Rajini. Rajini could join NDA and Kamal UPA in my opinion.

Apart from these, other key players are AITC, BJD, TRS and CPM: AITC is facing the heat from BJP in West Bengal. It needs support of Congress to thwart attempts of BJP. However, Congress doesn’t gain much from the alliance as Mamata Banerjee doesn’t have any votes outside Bengal. Mamata is averse to joining any Third Front as the leadership issue has become complicated. 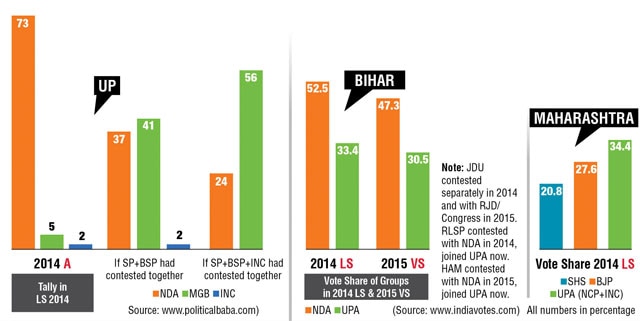 Naveen Patnaik has maintained an equidistance approach from BJP and Congress. He is not keen on joining UPA as Congress is the principal opposition party in Odisha. BJP is also gaining strength there and his joining NDA will help BJP piggyback on BJD’s vote bank.

TRS can’t join UPA as Congress is the principal opposition party in Telangana. War of words between Modi and KCR during state polls have ensured he can’t join NDA immediately. He is floating the idea of Third Front to make a rainbow coalition of regional parties. Akhilesh has shown interest while Mamata and Naveen have been non-committal.

CPM can’t join MGB, as it is left with sizeable presence only in Kerala and Bengal. If it joins MGB it risks losing space to Congress in Kerala. It can under no circumstances join hands with Mamata in Bengal.

All regional parties have a common wish: a hung Parliament. The elections circus has just begun.

This article was first published on dnaindia.com on 29 Dec. 2018.