In India, across states, caste plays an important role in elections. Rajasthan is not untouched by this phenomenon. In 2003 and 2013 elections, Chief Minister Vasundhara Raje played the caste card to the hilt calling herself daughter-in-law of Jats, daughter of Rajputs and samdhan of Gujjar. These three groups play an important role in state politics with intense rivalry witnessed between Rajputs and Jats for dominance of power. Vasundhara Raje’s son Dushyant has also learnt the mantra of social engineering from his mother. That’s why we have seen him sending his wife Niharika to campaign in Gujjar dominated seats as she hails from that community. The state has witnessed violent protests in the past from the Jats for inclusion in Other Backward Class (OBC), and Gujjars for inclusion in Scheduled Caste (SC) category.

On the question of the influence of castes in the politics of Rajasthan, political expert Mahesh Verma in a Centre for the Study of Developing Societies report says that, whoever denies it, is either lying or does not have a sense of state politics. Of the state population 89 per cent are Hindus, 9 per cent Muslims and 2 per cent belong to other religions. The SC population is 18 per cent, ST 13 per cent, Jats 12 per cent, Gujjars and Rajputs 9 per cent each, Brahmins and Meena 7 per cent each. Mahesh Verma also states that party which aims for power in the state must also win the support of OBCs along with other caste groups. Without them it is difficult to win the elections.

It is astonishing that while political parties focus their campaigns on public welfare, schemes, tickets are distributed on the basis of caste.

The impact of the influence of caste can be estimated from the fact that on one side Bharatiya Janata Party (BJP) president Amit Shah is saying, “BJP does not do politics of casteism, rather politics of performance”, on the other hand, Vasundhara Raje calls for a separate meeting of Rajput Samaj ministers to formulate a strategy to win their support and the elections. She has given the responsibility to Rajput leaders to work at grass root level and co-ordinate with the people from the community to soothe their anger against unemployment, reservations etc. 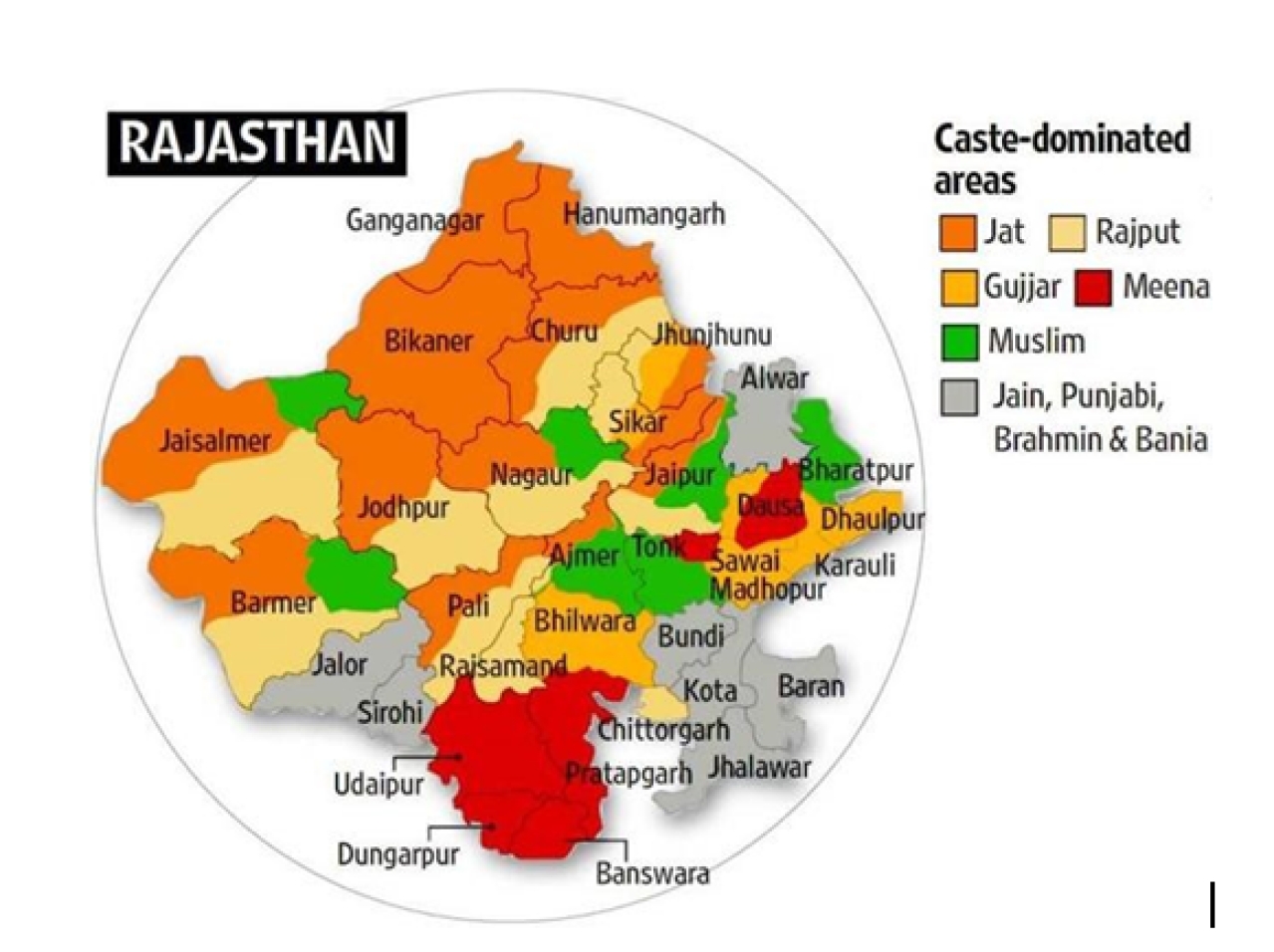 In Rajasthan, the BJP has traditionally been popular among traders, Rajputs (from Swatantra Party days) and OBCs, whereas Congress among Brahmins, Jats, Muslim, Gujjars, SC and ST communities. But due to the changing political scenario and the trend of incumbent government being voted out every five years, the choice of voters has also evolved. Brahmins have moved away from the Congress to the BJP. The Jats who were Congress supporters have moved away from the party after it made Ashok Gehlot (Mali community) the chief minister in 1998 and 2008.

The election of 2018 in many ways is a contest between Gujjars versus Meenas and Rajputs versus Jats. This can be judged from the fact that they do not vote together for a party and share a history of animosity/traditional rivalry. In the Samaru village of Jodhpur, the Jats allegedly burnt and looted the houses of Rajputs in the beginning of this year. It is believed that due to this, there is resentment among Rajputs against the BJP for failing to protect its core vote bank and hence the party had to face defeat in by-elections in Ajmer and Alwar.

Caste groups with small voting population over the years are uniting and together voting to reduce the influence of big, influential caste groups. BJP is eyeing the vote bank of the Congress as well as trying to save its own vote bank from poaching attempts by the opposition. In the absence of a strong Muslim leadership, the Congress party’s base among the community has weakened over the years.

Why The Congress Is Afraid Of Bringing Sachin Pilot Forward?

The Congress has a young popular face in Sachin Pilot, but the party is hesitating to gather courage to contest elections under his leadership. Congress president Rahul Gandhi may have said in his speech that the youth will form the government in Rajasthan but is shy of projecting Sachin Pilot as the CM candidate. According to the political analysts, the Congress doesn’t want to commit the mistake of 1998, of making Ashok Gehlot the chief minister instead of farmer leader and Jat popular face Parasram Maderna. Jats got shattered and took it as betrayal of the community. Congress had to pay for this with its loss in 2003, despite Ashok Gehlot doing well in many areas like welfare of the youth, employment, overall development. Most people were convinced that Gehlot would be able to break the trend in 2003 and the government would be formed by Congress. That’s why it doesn’t want to project a Gujjar as CM candidate which would make the Jats and Meenas angry.

A Broad Coalition Of Caste Groups

Congress is attempting to create a broad coalition of caste groups and revive the traditional vote bank. This time Rahul Gandhi has put forward Sachin Pilot to woo the Gujjars and the youth. He has handed over the responsibility to Ashok Gehlot to bring back the OBC votes to the party. Rahul is temple hopping to prove he is no less Hindu than Modi. However, it is clear that in Rajasthan, the party which is able to garner the majority support of Rajputs, Gujjar, Jat, Meena and OBCs and manage the contradictions within this social rainbow alliance will ultimately win the polls. The exit of Ghanshaym Tiwari could wean away a section of Brahmin voters from BJP. This is likely to be negated by the return of some Meena voters.

To sum up, the party which succeeds in creating a broad, more acceptable social alliance will ultimately win the elections in Rajasthan.

This article was first published in the Swarajya on 18th, Oct. 2018.