The general perception emerging is that while the Bharatiya Janata Party (BJP) may retain Madhya Pradesh and Chhattisgarh, it is likely to lose in Rajasthan. Initial surveys unanimously point towards this outcome. The state’s voters have a penchant for throwing out the incumbent governments. The party which wins the state elections normally goes out to sweep the Lok Sabha polls as well, and that has raised the stakes for Modi-Shah duo. The BJP state and central leadership is all set out to reverse the trend and prove wrong this popular perception. There are several factors which could just tilt the scale in BJP’s favour.

1. Modi is very popular in the state

The Modi factor is very strong in Rajasthan. In 2014 national elections, as per CSDS post poll survey, 42 per cent of BJP voters said they would not have voted for the party if Narendra Modi weren’t the PM candidate, the national average was only 27 per cent. As per India Today – Axis Political Stock Exchange released on 7 September 2018, 57 per cent of the respondents want to see Modi as PM versus 35 per cent for Rahul Gandhi, a lead of 22 per cent. About 46 per cent respondents rate the performance of Modi as good while another 12 per cent as average, exhibiting strong satisfaction with his performance. We have seen in recent Karnataka elections how Modi’s campaign in the last 10 days, resulted in a positive swing of 2 per cent to 3 per cent in favour of BJP, pushing it to the single largest party status. 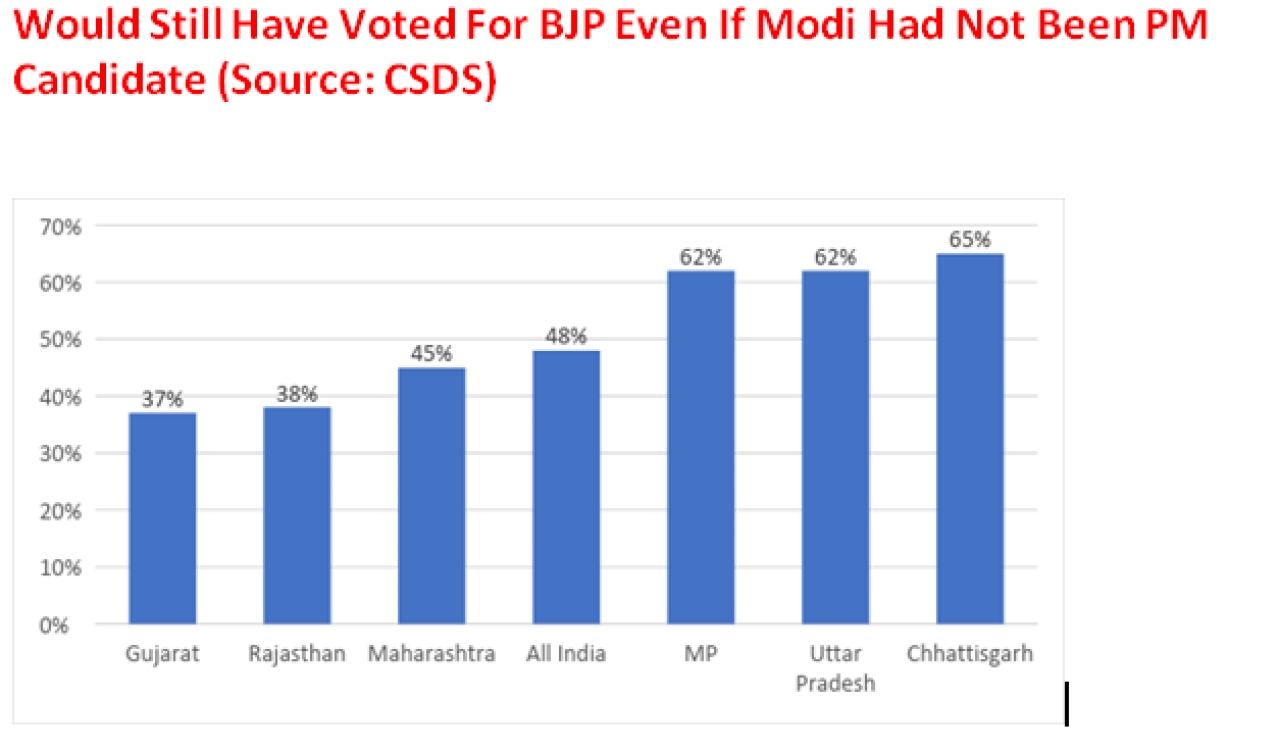 2. Emergence of the Women Voter

Women voters have been coming out in large numbers and participating independently in the democratic process in the state. The turnout of women in 2013 for the first time was more than men (75.6 per cent vs 74.9 per cent) and the BJP created history by bagging the highest number of seats ever by any political party. This helped Vasundhara Raje score an emphtaic win. Raje is one of the two women chief ministers in India and is counted among Top 5 women leaders. The popularity of Vasundhara Raje has further risen because of women oriented schemes. She has emerged as a role model for the Rajasthani women because of her confident personality, regal presence, transformative vision and administrative capability. Along with the popularity of the Ujjwala Yojana, this factor could galvanise women voters in the state.

3. Confusion in Congress over CM candidate

Congress high command has decided to contest polls under a “collective leadership”. This, even though, Ashok Gehlot had been the CM candidate of the party in last two elections, is credited with party’s good performance in Gujarat and is leading the pack among the Congress leaders at 35 per cent. Sachin Pilot, who is credited with party’s by-elections victories, is also a serious candidate for CM. While Pilot belongs to the Gujjar community which accounts for 9 per cent population of the state, Gehlot belongs to the Mali community (4 per cent). In times when elections are increasingly becoming presidential style, not having a clear candidate may harm the party’s prospects. Due to this confusion, Raje is tied with Gehlot at 35 per cent popularity ratings in Political Stock Exchange of India Today-Axis. 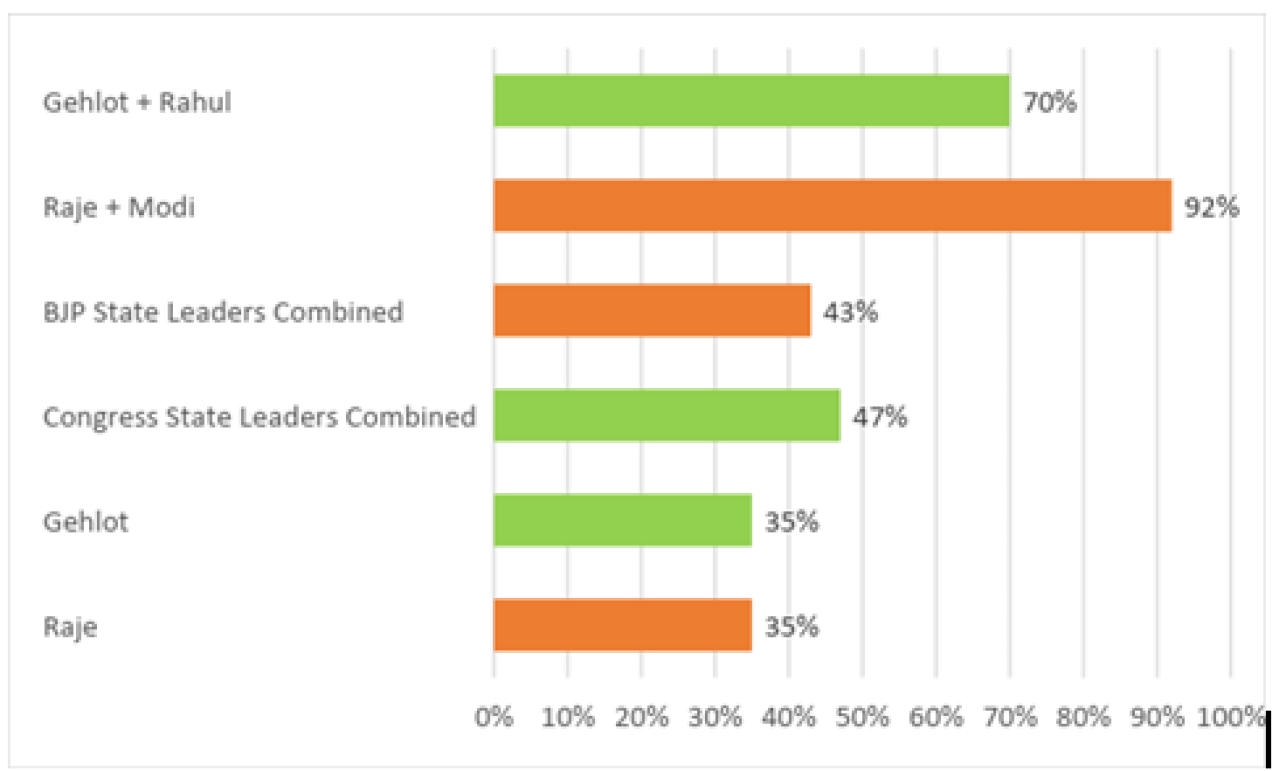 The return of MLA Kirodi Lal Meena is a shot in the arm for the BJP ahead of the assembly elections. Meena, a five-term MLA and two-time MP, is an influential leader and his community has a significant presence in 28 assembly seats in 11 districts of eastern Rajasthan. He had left the BJP in 2008 after differences with Raje and became the National People’s Party President. The party bagged four seats/4.3 per cent vote share in 2013 even when a strong BJP wave engulfed the state. This was 1 per cent higher than traditional third force Bahujan Samaj Party (BSP). It provides a cushion to the BJP in case an alliance of Congress and BSP materialises in the state.

5. Congress has been peaking too early in recent elections

Congress has been peaking too early in state elections and unable to push through. Despite all the positive signs in Gujarat and Karnataka, the party failed to win the elections. While the Gujarat and Karnataka results may have lifted the morale of the average Congress worker, the fact that in the end Modi comes and scores heavily, is a big dampener for the party worker. Another challenge for Rahul will be, how does he allocate time between the three states which go to polls together.

6. BJP has successfully formed an umbrella coalition of caste

BJP formed governments in three states together in 1991 in UP, MP and Rajasthan. These governments were dismissed by P V Narasimha Rao in the aftermath of the Babri Masjid demolition. While BJP lost in MP and UP, it retained Rajasthan in re-elections in 1993, despite a higher minority population comparatively in the state. The party over the years has expanded its footprint amongst castes which used to traditionally back the Congress like Scheduled Castes, Scheduled Tribes, and lower Other Backward Classes (OBCs). It has also been successful in shedding its urban party image, as the state has primarily rural seats (175 out of 200).

7. BJP’s retention ratio is on an increase

What Are Opinion Polls Saying?

ABP-C Voter opinion poll predicts a Congress win with 130 out of 200 seats, while India Today-Axis also suggests 48 per cent respondents want a change of guard in the state. Public prediction platform Crowdwisdom predicts a hung assembly with Congress as single largest party at 96, BJP at 91, BSP at four and others nine seats.

To sum up, a cracker of an election is on the horizon. The BJP is looking to reverse the trend like Akalis did in Punjab in 2012 and Amma did in Tamil Nadu in 2016.

This article was first published in Swarajya