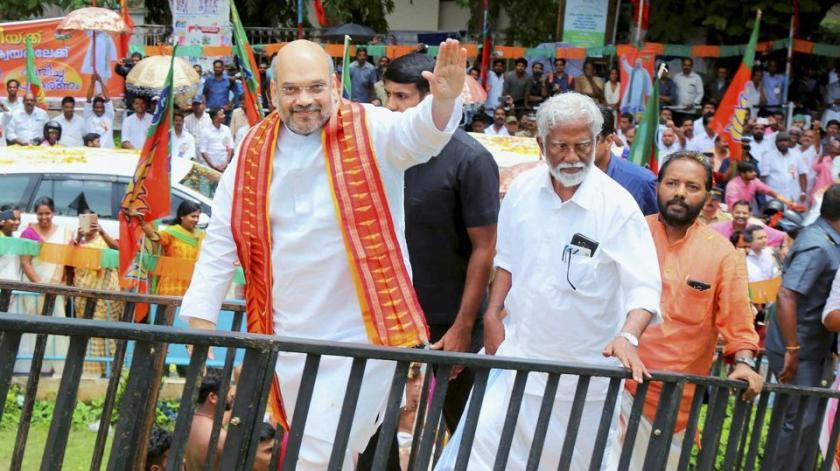 Amit Shah flagged off BJP’s 2 week long ‘Jan Raksha Yatra’ from Kannur in Kerala in a bid to bolster party’s prospects in the state ahead of 2019 Lok Sabha and 2021 assembly elections. The state has been witness to a bloody war between CPM and RSS cadre for the past many years. Amit Shah held Chief Minister Pinarayi Vijayan directly responsible for all political murders in the state. He even claimed that during Congress regime, no such incidents of violence take place, hinting CPM is wary of BJP’s rise and the threat it poses to Left’s vote bank. #ShahInKannur and #ShahDaresLeft were trending on top throughout the day on twitter with combined impressions of 2.2 crores.

Uttar Pradesh Chief Minister Yogi Adityanath is expected to take part in the yatra today. With this yatra, the party expects to boost the morale of the cadre, something it has been accused of neglecting despite being in power in the centre. BJP has now taken the war to one of the last red bastions remaining in the country.

BJP led alliance recorded an impressive performance in 2011 Lok Sabha and 2016 assembly polls. It managed to more than double its vote share from 6% in 2011 to 15% in 2016, also opening its account in the assembly.

Left Democratic Front (LDF) has been the traditional Hindu party in Kerala getting support of Ezhavas, Nairs, and Dalits accounting for c.50% of population. Congress on the other hand has historically received support of minority community (Muslims + Christians) and section of upper castes representing the other half of the population.

BJP through its deft social engineering formed an alliance with Bharath Dharm Jana Sena before state polls in 2016. BDJS has significant presence among Ezhava voters and helped party to bag 18% vote share. BJP’s Hindutava philosophy has attracted the Nairs and the party support from the community increased to 34% (one-third) in state elections. Similarly the support from Dalits has also been increasing over the years to 23% in 2016. These 3 caste groups account for 43% of population. BJP is now the second choice of Nairs and Scheduled Caste in the state.

BJP gained votes from both the Congress (Nairs 21%) and CPM (Ezhavas & Dalits 17% each). This good show highlights that BJP is now increasingly taking over from Left as the Hindu party of the state. BJP strategy is to replicate its successful Upper Caste (Nairs) plus Dalits plus OBC (Ezhavas) vote bank model of other states in Kerala.

Left Front is left in power in only one state, Tripura, apart from Kerala. Tripura citadel is also under threat from BJP as it has been expanding vociferously in North East. BJP is also giving tough competition to Left Front in Bengal slowly emerging as the principal challenger to Mamata in the state. Left had to ally with its nemesis Congress to prevent a whitewash in Bengal.

Congress on the other hand is losing state after state since 2014. It lost Maharashtra, Haryana, Jharkhand, J&K, Assam, Uttarakhand, Manipur to BJP and Kerala to Left. If BJP manages to win in 2019 central elections, odds heavily in its favour, Congress and Left will get more alienated from voters nationally. This will also have an impact in Kerala.

CPM led Left Democratic Front (LDF) and Congress led United Democratic Front (UDF) have taken turns to form governments in the state since 1977. In 2021, going by the trend the LDF is likely to be thrown out of power. With Congress graph declining elections after elections, BJP hopes to make the contest truly triangular.

Kerala now accounts for more than 5,000 shakhas per day. Amongst the southern states, BJP has one of the highest number of party workers in Kerala. RSS claims its 120 workers have been killed since 2001, 84 alone in Kannur. It will try to portray more and more that it has been on the receiving end for fighting for the Hindu cause.

However, it’s not going to be easy for BJP, after all in reality it has just one MLA in the assembly.

Leadership ratings have been one of the key deciding factors in Kerala polls, with elections very personality driven. The winning coalition in 2001 and 2006 benefitted from the higher popularity ratings of their leaders. BJP doesn’t have leaders of Vijayan or Chandy / Antony’s stature. BJP has appointed former Kerala IAS officer Alphons Kannanthanam, as minister of state in the ministry of electronics and IT, in a bid to project a leader from the state. But 4 years till 2021 is very short period to create an aura around a leader.

Many studies have shown that BJP benefits from polarization. However, the strategy could backfire in state as it is 100% literate. In 2016 elections as well, party was positioned to do well, but could manage only 1 seat. This is brilliantly explained by K.P. Jayadeep, ‘’The halo and hype around Lotus faded due to the aggressive Hindutva agenda projected by BJP and RSS during the poll campaign. It helped minorities especially Muslims to cast vote strategically to defeat BJP.”

Kerala has one of the highest proportion of minorities in the country, 45 per cent of the population (27 per cent Muslims and 18 per cent Christians). While the state accounts for the highest Christian population in India (61 lakh), it accounts for the sixth highest Muslim population (89 lakh). The minorities are in a position to influence the outcome in about 60 seats. Though they have traditionally voted for Congress led UDF, they can switch sides to defeat BJP, if it is in the reckoning in 2021. I won’t be surprised if Congress and Left come together like in Bengal to stop BJP march.

To conclude, BJP’s strategy is to build the momentum of 15% vote share in assembly polls and take it to 25%-30% banking on RSS machinery in state and declining Left – Congress graph. This will put the BJP in a pole position. As a first step its strategy is to make debut in the state in Lok Sabha polls which will give a fillip to its prospects in 2021. This yatra is surely going to re-juvenate party cadre and strengthen its prospects. However, challenges remain, and they are big. BJP has to look beyond the three caste groups if it wants to make a meaningful impact in the state. It needs to devise a strategy to woo a section of the Christian community, something which it has done successfully to an extent in Goa. It’s an uphill task for the party to lay claim to 2021, but it has nothing to lose.

The article was first published in TheQuint.