Congress was trounced in all 4 state assembly elections (touted as semi-finals to Lok Sabha). It did win the small state of Mizoram (but this has no impact on national politics). Out of the 4 states, Congress was in power in Delhi (15 yrs) and Rajasthan (5 yrs) while BJP was in power in MP and Chhattisgarh (10 years each). While BJP retained MP and Chhattisgarh, it snatched Rajasthan away from Congress and emerged as single largest party in Delhi (but for AAP would have formed govt. here as well).

Congress was literally raped in the state. It won only 23 seats (-73) while BJP won 162 seats (+84). So what are the reasons attributable to Congress loss?

(i)                  Strong anti-incumbency against State as well Central govt. which is embroiled in scams, corruption charges and responsible for high inflation, economic slowdown

Rajasthan shares its southern border with Gujarat and BJP has done well in the border constituencies.

BJP improved its tally by winning 165 seats (+22) while Congress tally reduced to 58 (-13). While voting in Rajasthan was a negative vote (against incumbent govt.), voting in MP was a positive vote (for development). So how did Shivraj Singh Chouhan manage to pull off a 3rd consecutive victory for BJP?

BJP retained Chhattisgarh by winning 49 seats (-1) while Congress improved its tally to 41 (+3). While voting in Rajasthan was a negative vote (against incumbent govt.), voting in Chhattisgarh (like MP) was a positive vote (for development). So how Raman Singh did become 3rd time CM, feat similar to that of Modi.

(iv)              Modi held 12 rallies in the state covering 38 seats, where BJP won 22 and is partly credited for victory especially against the backdrop of sympathy for Congress as its top leadership was killed by Maoists recently. More so since this was a close fight.

In Delhi, though Congress was raped in a similar way as Rajasthan, down to 8 seats only (-35), the anti Congress vote got split between BJP (32) and newly formed Aam Aadmi Party (28). This has resulted in a hung house in Delhi with possible re-election. So much so that even 3 time CM Shiela Dixit lost her seat to AAP’s Chairman Arvind Kejriwal. So what led to Congress downfall?

(i)                  Admittedly Shiela has done good work (flyovers / metros) in Delhi and that’s why she was CM for 15 years. Commonwealth Games scam, worsening law & order situation (Delhi is tagged as rape capital of India) and price rise led to her downfall. It is noted that Police department is not under Delhi CM but under Home Minister if India.

(ii)                This together with strong anti-incumbency against Central Congress govt. cost her dear.

(iii)               Delhi is not a full fledged state and being the capital the state elections are not fought only on regional issues but also on national issues.

(iv)              The capital was swayed by the movement of India Against Corruption (Anna Hazare) and breakaway faction of Kejriwal’s AAP caught the imagination of voters and fell short of half way mark.

One of the main reasons for Congress faring badly is that they don’t have strong state / regional leaders. It rules more than 10 states in the country but doesn’t have a single solid state leader. This is the deliberate strategy of Gandhi family so as to prevent strong leadership in regions which could provide threat to their command in the party. Plus if any leader starts emerging stronger they encourage infighting and prop up other leaders. 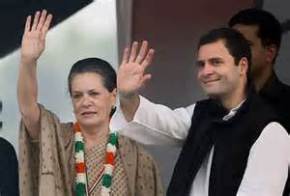 They have pitted Mahant in Chhattisgarh vs Jogi, Scindia vs Digvijay in MP etc. Strong regional leaders like Sharad Pawar and Jagan Reddy have left the party. Nowadays when BJP is trying to force a Presidential form of elections, absence of strong regional leaders has weakened the Congress and will continue to do so.

They are facing the same issue in national elections. They don’t have a single leader in party who can take on Modi. They themselves (Rahul / Sonia) don’t want to fight Modi directly and have not developed second rung leadership which can take Modi headon. They are in search for another Manmohan, let’s see who they find out and name as their PM candidate.